This week, Legion debuted on FX with a premier episode that may have been lost on some viewers. With little mention of mutants or anything else to truly connect the series to the X-Men franchise. Those only tuning in out of curiosity would have no way to detect the show’s comic book roots. The question to ask, however, is whether or not this is a good thing. While this is only the first episode, so there’s room to grow, is it ideal for a series to not be up front about where it comes from? It’s worked for The Walking Dead. Will it be good enough for Legion?

After a brief introduction to our central character, David, setting him up as your typical “troubled youth” type, we get a look at his daily life in a psychiatric institution. It plays out as a stereotypical 60’s institution setting, with the central character spending most of his time aside his sardonic companion, scoffing at the therapists and poking fun at other residents. David develops a quirky romance with a newer resident, then the true story picks up. The remainder of the episode becomes a chopped up mix of past and present, as we’re introduced to the dangers that lie in wait for David, as his powers start to garner attention from outside sources, not to mention as he begins to understand his own potential. 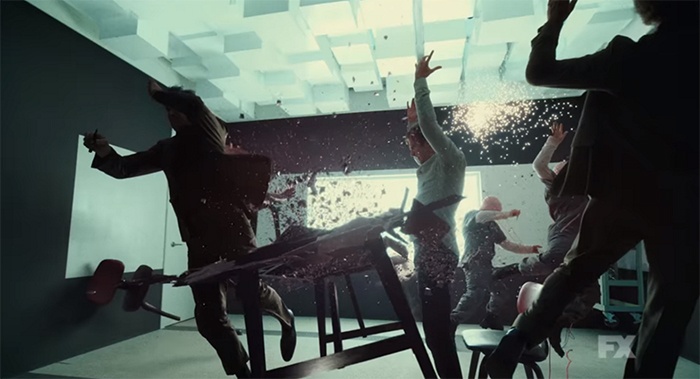 The feel of the show changes drastically as the episode progresses. From lighthearted and witty to dark and borderline frightening, as well as particularly grotesque. While it thus far pales in comparison, the setting, and even the music at times, does call to mind similarities to Stranger Things, but with fewer pop culture references. Where the show truly falls short is near the ending, when there is an attempt at hand to hand combat. For individuals who we are expected to believe are super powered individuals who seem to have been trained in combat, they don’t throw very convincing punches against enemies in tactical gear. If the show intends to be action oriented, they will need to up their choreography and execution. However, the same was true for Agents of SHIELD in the beginning, as well. It is not an insurmountable task by any means. Worth mentioning is the utterly out of place, but overall entertaining musical number near the end of the episode, providing a lighthearted reprieve which I personally would not mind seeing more of in future episodes.

What interests me most about Legion is the potential. While I don’t want to give away too much about the main character’s background from the comics, I know that there is a lot to expand upon, if the show’s creators decide to. This is likely what will keep me coming back to the show, regardless of rough waters to start with. There was a lot that was set up with the first episode to give the show some direction, and allow for progression with the story. It would be nice if they took a route that would keep the material fresh, but also make the fans of the comics happy, as those who have little context or background have no expectations at present for how the series will or should unfold.

Have you checked out Legion yet? Do you plan to keep up on the series? What characters and tie ins to the X-Men Universe would you like to see them explore? Feel free to share your thoughts in the comments below.