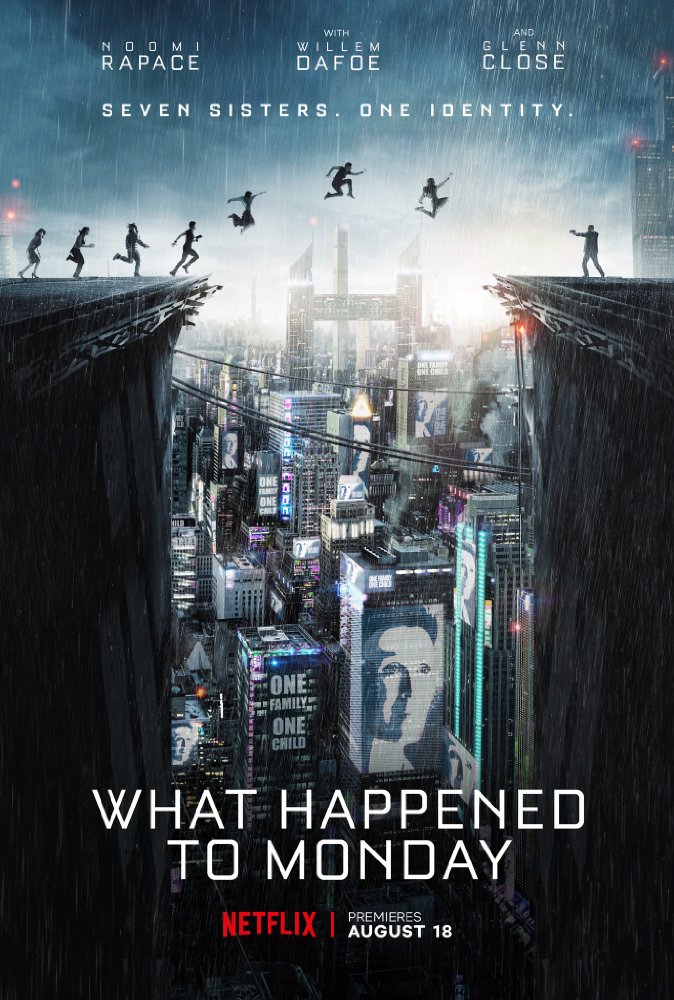 In the past year, Netflix seems to be really ramping up their production of original films and TV shows. While there are some releases that Netflix promotes highly, and tend to get a lot of attention on their own, there are others that get pushed out, and we hardly hear a thing about them. Having read about What Happened to Monday about a month before its release, I can’t help but feel that it fits into this latter group of productions. What I don’t understand is why. While it’s not quite the major budget sci-fi spectacular that we’ve come to expect with the advances of modern special effects, I feel like there’s a lot left to appreciate about a science fiction movie that can function without the high dollar special effects. Making use with what they have in the characters and story rather than having to build an entire high-tech, believable futuristic world with flying cars and aliens and all that nonsense. What Happened to Monday, in my opinion, pulls this off wonderfully.

The movie takes place in a dystopian future (because what other setting is there?) where the population has spun out of control. Climate change is wreaking havoc on food supplies, and the world simply can’t keep up. Fortunately, someone comes forth with a plan. Establishing the Child Allocation Bureau, Nicolette Cayman (Glenn Close) helps pass a law mandating only single child families. Any family who has more than one child, upon birth, or if discovered later, has all but the first born child rounded up and cryogenically frozen, to be brought back at a time when the world’s resources bounce back. In this world, we are introduced to Terrence Settman (Willem Dafoe), who has just arrived for the birth of his identical septuplet granddaughters, born to his estranged daughter, who died in childbirth. Fortunately, the doctor who performed the delivery had agreed not to report the multiple births. The seven girls, named for each day of the week, are raised to assume a single personality in the outside world. Each of them are allowed to leave the house on the day of the week that aligns with their name. Living and working together to maintain this facade, the girls are able to settle into a seemingly normal, unassuming life, until one day, Monday does not return home, and the girls are forced to personally investigate their missing sister, fearing that their secret has been discovered.

The premise of the film, by itself, is rather unique. Not altogether mindblowing, but enough to set itself apart from some of the other dystopian future tales we’ve heard. However, this film does not simply rely on a clever premise to generate interest. It is backed up by a plot that unfolds at a steady pace, giving the audience plenty of time to put the pieces together themselves, if they’re paying enough attention. There is also some rather good action sequences. Not quite on par with the Daredevil, season 1 hallway scene, but they make good use of the environment, as well as the advanced technology established in the story to keep the fights fresh and moving, but without requiring all seven girls to have unexplained ninja skills. As each of the girls has their own personality, some of them are more equipped to fight, either hand to hand, or being resourceful. Others tend to get their asses handed to them. Ultimately, the action is brutal and unapologetic, and definitely keeps the film from growing boring, but not so over the top as to incite heavy eye rolls.

Obviously, being a seemingly lower budget production, this film is far from perfect. There are some plot holes, but only the kind that leave you with questions, rather than saying “this makes no sense”. The world that the movie exists in lacks the kind of depth you would get from a greater production. The focus remains on the girls, and their direct daily interactions and their involvement concerning the Child Allocation Bureau. Because of this, some of the characters, even the girls, do lack depth, as well. While there are a few who stand out more than the others, the majority of them fit into their perfect little stereotype. You’ve got the smart one, the punchy one, the party girl, the athlete. Imagine an extremely violent episode of The Smurfs. It’s not difficult to determine who is supposed to stand out as a focal character. The worst part of the movie, however, was the makeup for Glenn Close’s character, Cayman. I don’t know why they felt the need to make her look the way she did. She looked like what would have happened if Robin Williams had passed on Mrs. Doubtfire, so they had to cast Gary Busey, instead. Unsettling.

At only a little over two hours, What Happened to Monday is an easy film to squeeze in on a slow evening, and I highly recommend that anyone who is a fan of science fiction check it out. I do believe you’ll be pleasantly surprised.