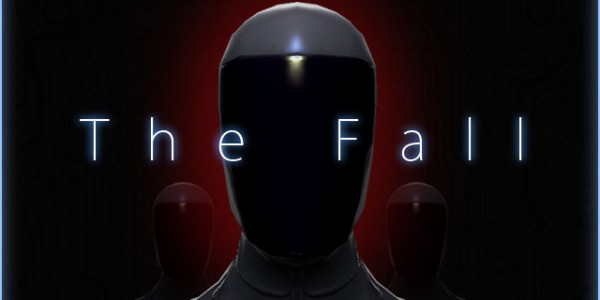 Indie games these days can be hit or miss. While there is always some appreciation to be had for small developers and the hours that they put into their product, the final product will often be lacking in some areas, often feeling incomplete, or too focused on one facet of the process over others, and the game can lack balance. One game might have an extremely compelling aesthetic, but fall short of an enjoyable gameplay experience. Some will feature a central gimmick, and fail to include an enticing storyline. However, every so often, a game will be released that really hits all those high notes, and sets a new standard for the indie scene. One such game, released in 2014 by Over the Moon Games, is The Fall.

I cannot rightly recall what compelled me to buy The Fall. I had not been following the game’s production at all, and at face value, it is not the type of game I would normally spring for. Having been compared to Metroid, a series I cherish, but do not particularly excel in, and being yet another side scroller (anyone who knows my gaming habits knows that I tend to despise side scrollers), the only feature that I can think of that may have caught my interest would have likely been the story. Even from a simple synopsis, the depth of this game’s story is more than apparent.

The Fall centers around Arid, a military grade space suit fitted with an artificial intelligence program, designed to control the suit and protect its passenger in the event of medical emergency. Arid crash lands on an unknown planet, and her passenger appears unresponsive. Arid then begins exploring her surroundings in order to seek help for her passenger. Due to restrictions in her protocol keeping her from being able to utilize all of the functions of the suit she controls, she is faced with challenges in meeting her objective. I cannot give away any more of the story than this, as I feel very strongly about how this game should be experienced. Spoiling too much of this game would be akin to spoiling Game of Thrones or Walking Dead. It would just be wrong.

As mentioned previously, The Fall has been compared to Metroid in its basic format, and this is not inaccurate. The player progresses by unlocking new abilities, triggered by different contextual events. However, another comparison that comes to mind, when I play, is the first Resident Evil game. Throughout The Fall, there are certain tasks you must complete, which you learn about through reading notes and other documentation left behind by former staff from the facility you find yourself in. These are not only conducive to solving puzzles in the game, but also contribute to understanding the backstory of the game.

The mechanics for The Fall are relatively easy to acclimate to. While they may not be entirely intuitive at first, once the player learns to use them, it becomes second nature quickly. Most of the game involves puzzle solving, learning where to use what items, in order to complete a specific task. This is somewhat reminiscent of a much more comprehensive and in depth “escape the room” game. Combat is not a huge focus, but is as enjoyable as it is challenging. Lending depth to the environment, Arid is able to duck behind certain obstructions, which otherwise rest in the foreground or background, using them as cover in fire fights.

One of the greatest achievements in the production of The Fall is in the dialogue. Paired with fantastic graphics and interesting characters, the delivery of the scripting and voice acting surpasses most first party games in quality. All of the facets of this games development work together to make for an incredibly immersive experience. The overall atmosphere of the game is dark, and has some morbid tones, but the dialogue and delivery helps to provide levity in such a bleak setting.

Ultimately, I cannot recommend The Fall enough. Available on Steam, WiiU, PS4, and Xbox One, there really is no excuse for passing this game over. As an added bonus, the sequel, The Fall: Unbound, releases in just under two weeks, on February 13th. This is still plenty of time to pick up The Fall and play through the first story, so that you can pick up from there when the sequel comes out. I don’t often make straight forward suggestions for purchasing games, but The Fall really is the sort of game that everyone who owns a modern console should consider checking out. Watch the trailer below, and pick up The Fall on the platform of your choice today.

What are your thoughts? Have you already played The Fall, or do you plan to now, before the sequel releases? How does the game compare, in your opinion, to other games of a similar genre? Feel free to share your thoughts, and stay tuned for a follow up discussion after The Fall: Unbound releases.